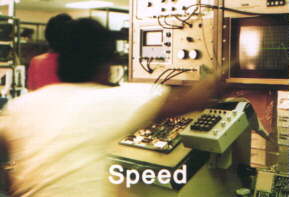 Cable TV system operators purchase and maintain a large quantity of sophisticated addressable converters for installation into their subscriber’s homes.    There is a premium placed on verifying that a unit has been received from the manufacturer in working condition before placing it at a subscriber’s location.

In addition, units that fail in service can be diagnosed and possibly repaired by the operator, rather than being returned to the factory for repair.

We designed and constructed a computer-controlled automatic tester for the TOCOM 55 Plus Addressable Converter for use at the manufacturer’s production facility.  By adding some test signal generation equipment, this test station can be used by any cable TV operator for the 55 Plus Converter.

The test operator does not directly handle any of the equipment in the test station; rather, all control is managed through the computer keyboard and the converter keyboard. Test results are displayed in both English and Spanish, and the operator is prompted through the test sequence, thereby simplifying the training process.

Three sets of  nine different testers (27 total) were developed for this program.