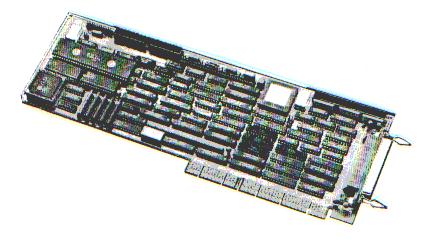 A new Extended Industry Standard Architecture (EISA) bus computer market was defined by Compaq, Olivetti, AST, Hewlett Packard and others.  These computers were to be used for high speed file servers and workstations, and required new high speed disk, tape, and printer controllers.  Companies that built all new controllers would miss the market window.

With the new controller, the new EISA computer was expected to handle 256 users instead of the original 45.

Our client had an asynchronous VME bus design already in production that had similar functions required by EISA.  A UNIX software driver and on-board firmware also existed.   The client required that any changes in the card allow it to use existing software as much as possible.

The client also required that the product be ready in time for an important trade show.  There was not enough time in the schedule to build a wire-wrap prototype.  Also, the target computer, which was based on the 80486 chip from Intel, would not be available until the very end of the project.

The existing schematics were compiled on a Computer Aided Engineering (CAE) workstation, digital simulation was used, wave forms were plotted and analyzed, and corrections were made.   After modifications were made to the bus interface, a new synchronous state machine was implemented using programmable logic devices (PLD).

The final design was a 10-layer surface-mount and through-hole PCB design.   Dozens of circuit cards were manufactured and assembled, and preliminary testing was done while the anxious wait for the new EISA computer continued.