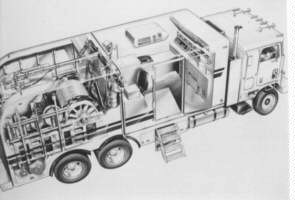 A state of the art seismic system controller was recently delivered by MTSI to Europe.    In this application, a large number of seismic microphones send large amounts of data in real time to a centrally located data-recording system.     The central system needs fast access to peripherals, multi-tasking capability, and access to a large number of fast local area network ports.

MTSI developed  a central site system around the VME bus.    A VME bus 64-bit extension, called VME-64, was used to improved the bus troughput to 60 megabytes per second.    Multiple IBM compatible 80386 and 80486 computers were used as master controllers and to control disk drives and the CRT monitors.    A Motorola  68HCE040 microcomputer, five additional  IBM-compatible  microprocessors and a multi-channel local area network controller were needed, but only two slots remained.

The three card set consists of a set of piggyback printed circuit cards,  some with as many as 10 layers.    The MTSI-designed boards collect up to 50 megabits per second from the thousands of microphones.

The data is buffered, time aligned, and sign extended before it is shipped to a very large VSB memory card.